When she pulled away from the long golden eyepiece of the telescope, the world pulled back to the small tower study and the glittering darkness of the sky pressing against the tall window.

The one that had called out was the small black cat dangling in a suspended planter with one paw over the edge, his eyes heavy with boredom.

“Do you think he will come back?”

“Kino. I thought you were going to work on useful riddles for the hero of dawn.”

“I know. I was, but what’s the point if there is nobody to hear my lame advice. And Sir Sorvia laughed the best. Remember when he knocked over that whole pile of books there or when he forgot his magic charm and we had to open a rift to give it back. Can’t we just call him?”

She returned to the open book on her table where a planet swirled of magic purple ink and flipped to the next page which was empty.

“But…how can you be sure. You never saw where he went. The portal could have gone anywhere.”

“He wanted to go home. The portal inscription says it will send them home so it’s better to believe he got to where he wanted. Besides, it’s not like I didn’t try before. My hand won’t go through a portal. Just like how we cannot leave this tower.”

“So now you’re looking for this dawn hero instead. A new request, a new hero, right?” 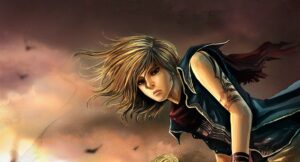 With Keenin’s new power to control fire, everyone wants him on their side. A holy knight wants to train him, an enemy army wants to capture him, fate wants to make him the hero, and the death god still wants him dead.